1. THE STADIUM
2. THE THEATRE
3. ΤHE BOULEUTERION
4. THE PRYTANEION
5. THE SACRED HOUSE
6. THE TEMPLE OF APHRODITE
7. THE ACROPOLIS
8. THE CHRISTIAN BASILICA 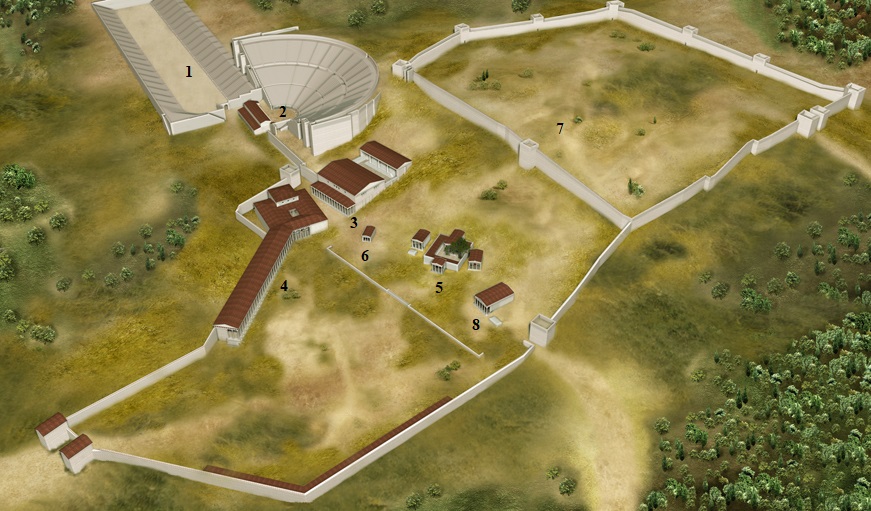 1. THE STADIUM
The stadium of Dodona was built after the first destruction of the sanctuary by the Aetolians in 219 BC. This is one of the few ancient stadiums with stone seats. Every four years the Stadium hosted the Naia, athletic games in honor of Zeus. Later on, they included also musical and theatrical contests and they took on a panhellenic character. Of special importance is the fact that the Naia Games are mentioned together with the Olympic, the Pythian, the Isthmian and the Nemean games, as the most important competitions of the ancient world in the famous Antikythera Mechanism 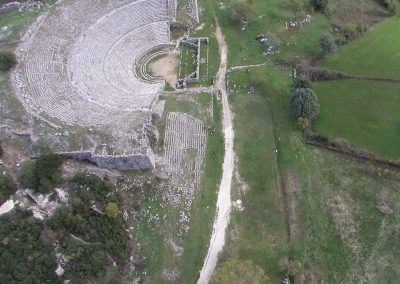 2. THE THEATRE
The ancient theatre is built in a natural cavity. Four horizontal corridors divided the cavea into three sections with a total of 55 ranges of seats. In the lower corridor there were seats destined for officials and guests of honour (prohedria). The orchestra does not form a complete circle. A leveled rock in the center was the base of the altar of Dionysus (thymele). The rectangular scene had two square rooms (parascenia) and four-square columns for the timbers of a wooden proscenium. On the east and the west side were the entrances to the orchestra respectively. During the reign of Augustus, the theatre was transformed to an arena. 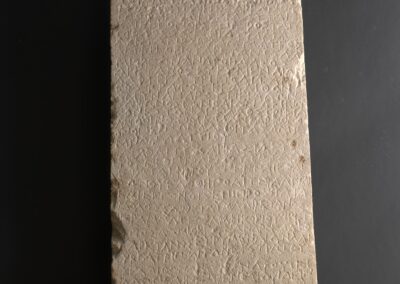 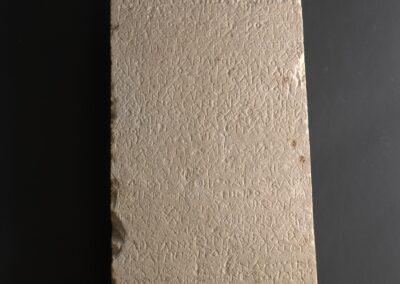 3. ΤHE BOULEUTERION
The Bouleuterion had an administrative and political character. It consists of a large hall 1,260 m2 in area with a Doric colonnade (stoa) in front. The surviving outside walls formed the stone base of the building, but the upper part was built of baked and unbaked bricks bonded with mud. 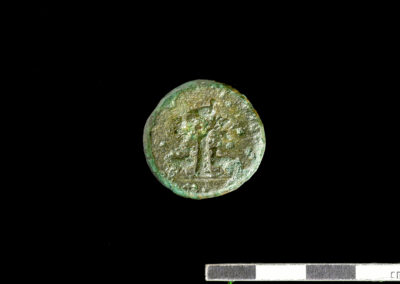 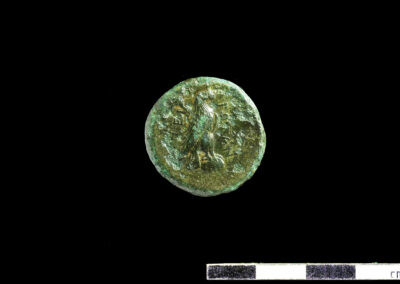 The Prytaneion is one of the most important buildings of administrative character in the sanctuary of Dodona, which is part of the building program of Pyrrus. It housed the officials who managed the sanctuary and the festival. The Prytaneion is a large square building with a peristyle courtyard, to the west of which dominates the large hall with the remains of stone seats. The building dates to the beginning of the 3rd or the end of the 4th century BC. During the period of the Epirote Alliance or Apeiros (232-168 BC), a new wing with six rooms, three auxiliary spaces and three nine-bed rooms was added to the north side of the building, which served for the catering and residence of the magistrates and other VIP’s. 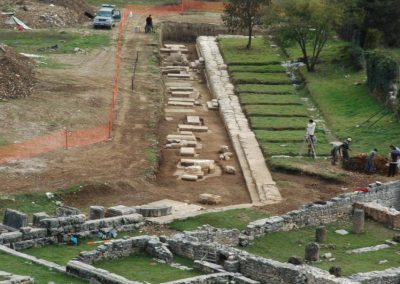 5. THE SACRED HOUSE
The temple of Zeus, with the oracular oak-tree (on its east side), is a rectangular building (20.80X19.20m.) with at least four building phases.
The original nucleus consisted of a small temple with a pronaos and cella dating to the first half of the 4th c. BC. At the beginning of the 3rd c. BC, in the reign of King Pyrrhus (297-272 BC), the ashlar precinct was replaced by a larger one with Ionic colonnades on three sides of the court and an entrance in the front; The interior layout consisted of a court and the colonnades in the form of a Π enclosing the lofty Oak-tree where the God lived. 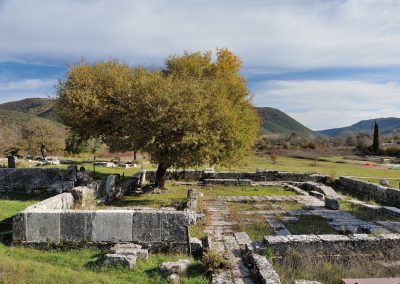 6. THE TEMPLE OF APHRODITE
The Doric-style temple of Aphrodite is of simple construction, distyle in antis. The building is constructed in two phases. In the first, the cella was erected and in the second was added the pronaos. There is not enough information about the dating of the construction periods of the monument. A group of clay female figurines holding a dove and associated with the worship of the goddess Aphrodite has been found in the temple. 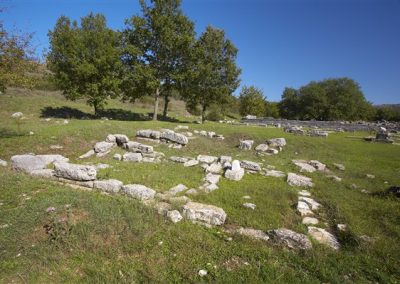 7. THE ACROPOLIS
At the top of the sanctuary of Dodona develops the acropolis of the settlement. The top of the hill is surrounded by an isodomic wall of the 4th century BC. The perimeter of the wall is estimated at 750m. It covers an area of ​​3.5 hectares, which according to the residential density of ancient Epirus, would correspond to a population of about 1.000 inhabitants. To strengthen the protection of the gates, the wall is periodically reinforced with rectangular towers, especially on the west and north sides. Some relics belonging probably to buildings are noticeable but it remains unexcavated in the whole. 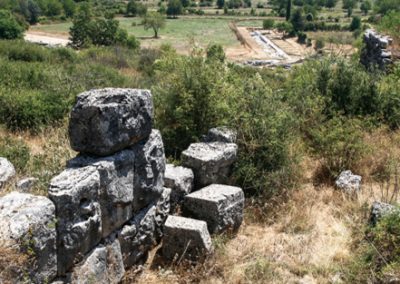 8. THE CHRISTIAN BASILICA
From the end of the 4th century AD., Dodona is the seat of a bishop. Inside the oracle, a three-aisled basilica has been excavated dating to the late 5th-early 6th century and testifies the continuity of the religious character of Dodona even after the establishment of Christianity. The basilica was radically repaired in the middle of the 6th century with the addition of a trefoil sanctum, which had three apses on the east side (one in the center and two lateral ones). The operation of the sanctuary was terminated with an imperial decree in AD393. 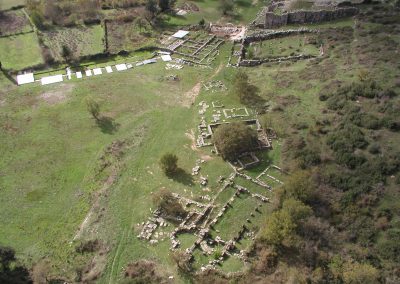 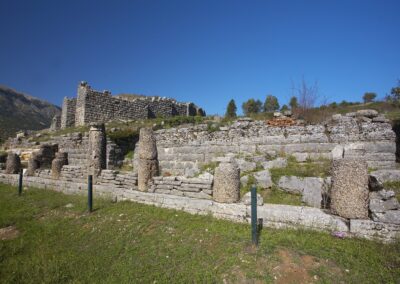 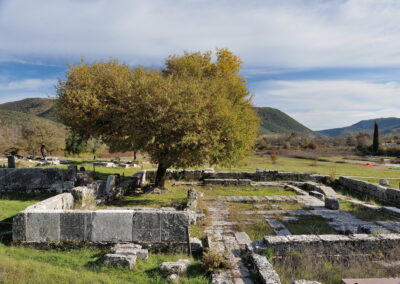